The Burning of Judas 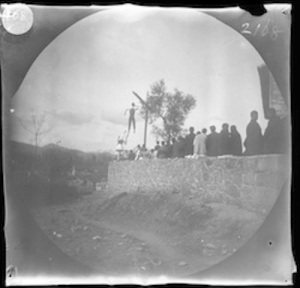 © Institute of Archaeology, University of Oxford

So it seems this lantern slide, taken from the Myres collection, has caused more than a little concern! This is not, I repeat, NOT an actual hanging man, but in fact an effigy for an Easter-time ritual. This picture shows the ritual held in Orthodox and Catholic Christianity, known as the ‘ Burning of Judas’, observed in this case in Greece by Myres at Achmet-Aga in 1893. Though there are many variations to this ritual, generally an effigy is hung on Good Friday and then burnt on the night of Easter Sunday. Widely practised by Orthodox Christian and Catholic communities all over Europe in the past, the festival continues in many parts of South America and the Mediterranean, including Cyprus and Greece where it is known as “lambratzia“.

Myres described this scene in an article published in 1950;

“Meanwhile the young men had set up a gallows on the churchyard wall, and hung from it a regular ‘Guy’, in an old suit stuffed full of straw, crackers, cartridges and bags of gunpowder, and sprinkled with pitch: there was a slow-match in one foot. While the priest and choir, followed by the women and children made procession round and round the building- in some places a cord is wound round it and tied- the fuse was lighted”

1 Response to The Burning of Judas

Treasures of the Library at Balliol College, Oxford

launches a project every month