Posted on July 19, 2011 by Sally Crawford and Katharina Ulmschneider

In 1953, O.G.S. Crawford was making copies of his faded prints and mounting them on card. In this one, showing his excavation team at Hengwm, Wales in 1919, just after the end of the First World War, Crawford shows his place in the photograph with an arrow, and the comment ‘note shorts’. 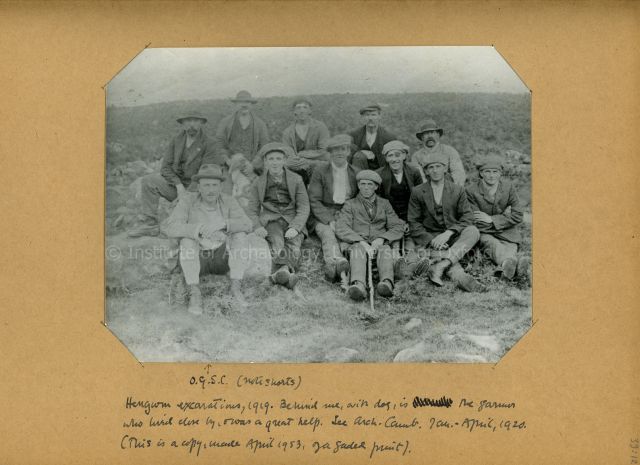 The shorts had caused Crawford some trouble. In 1919, shorts were for boys. Crawford, however, was camping out at the excavation, living rough, miles from anywhere, and he was more interested in comfort than formality. When members of the Cambrian Archaeological Association turned up to visit the site as part of their summer meeting, it did not occur to O.G.S. to change. Several of the visitors were shocked by his shorts. Luckily, one of the party, the well-respected archaeologist Professor Boyd Dawkins, came to O.G.S.’s defence: Crawford, he explained, ‘had a hard time as a prisoner of war and perhaps had not yet completely recovered his balance’.

Not impolite, then – just mad!

Crawford described the incident in Said and Done: Autobiography of an Archaeologist, first published in 1955.

At the end of the excavation, Crawford set off back to Berkshire on foot – a distance of some 150 miles. He does not record whether he wore shorts for the journey.

About Sally Crawford and Katharina Ulmschneider

We look after the archives at the Institute of Archaeology, Oxford. Please go to: http://www.arch.ox.ac.uk/archives.html to find out more about the archives and our research.
View all posts by Sally Crawford and Katharina Ulmschneider →
This entry was posted in OGS Crawford, Photography and tagged archaeologist, archaeology, Crawford, Dawkins, excavation, Hengwm, prisoner of war, shorts, Wales. Bookmark the permalink.

Treasures of the Library at Balliol College, Oxford

launches a project every month